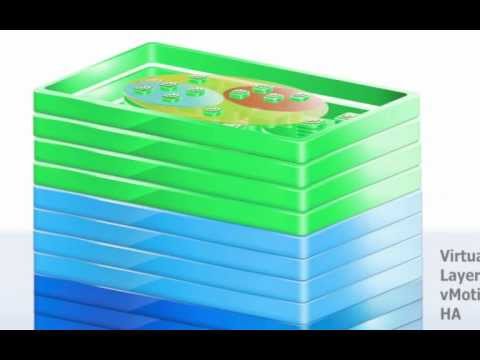 Our Enterprise Virtualization Environment, is what we have affectionately named E.V.E. E.V.E. is a conceptual model of our state-of-the-art virtualization infrastructure. It was designed with several goals in mind:


E.V.E. consists of three major layers each made up of four sublayers. Each layer and sublayer represents a basic building block of the environment. The major layers, from the bottom up, are the Physical Layer, the Network, Server and Storage Layer, and the Virtualization Layer. Our Enterprise Virtualization Environment continues to evolve as new technologies and products are released. We select best-in-class solutions for each component in the environment, implementing data center, networking and VMware best practice at every level.

The first main layer is the Physical Layer and the first level within the Physical layer is the SAS 70 Type II Certified Data Center. The data center building is the first layer of our environment. The 40 megawatt, 450,000 square foot data center is SAS 70 Type II certified. It is equipped with a Dual-interlock, dry-pipe pre-action fire suppression system with VESDA. With respect to earthquake safety, the entire facility exceeds Seismic Zone 4 requirements by up to 15%.

The second level is our State of the Art Physical Security. Physical access to E.V.E. is restricted to employees of Infinitely Virtual. The data center itself is staffed by security 24×7. To enter the building, you must first pass through a mantrap, operated by security guards and managed by both keycard and biometric access control. Entry to each floor and suite is controlled by keycard. All public areas of the building are covered by CCTV surveillance, which is monitored 24×7.

On the third layer, we have 100% Uptime Power Protection. E.V.E. is redundantly powered and backed up by both Uninteruptable Power Supplies (UPS) and generator power. All loads, including the cooling system, are powered by an “A” and a “B” circuit, each of which is robust enough to supply power for the entire load. Circuits follow a diverse path to distinct circuit breaker panels. The panels are powered by diverse UPS’s. Utility power and generators each connect to Automatic Transfer Switches, which feed the UPS’s. This configuration is designed to ensure 100% system up time by eliminating any single points of failure.
The final level of the Physical Layer is Redundant Cooling. Cooling is as critical to uptime as it is to environmental protection. Servers, storage and other networking equipment may operate in widely varying temperatures, but as the temperature in a data center rises, so falls equipment lifetime and power efficiency. Our data center cooling is controlled to achieve optimum equipment life and power efficiency. All cooling loads are supported by no less than N+1 cooling systems, meaning that E.V.E. continues to operate properly if one or more cooling systems are down.

The second main layer of EVE is the Network, Server & Storage Layer. The first level of this layer is Local Area Network & Internet Connectivity. This layer is E.V.E.’s nervous system. It is composed of redundant 10 gBIT ps core switches, multiple bgp routed Internet connections to multiple upstream service providers , and multiple firewall clusters. The center of this network is our redundant 10 gBITps layer 3 network switches. This configuration provides extreme throughput and low latency connectivity to our entire network, and it is intelligent enough to route traffic around any outages.

For Tier 1 Internet Service Providers. E.V.E.’s connectivity with the Internet is accomplished with multiple bgp routers connected to multiple upstream providers, including Global Crossing and Level Three. Our BGP network ensures that we route traffic the most efficient way to its destination, and that our network can sustain equipment or circuit failures without affecting customer connectivity. Our operations network and customers who purchase firewall protection are placed in VLANs protected by one of our firewall clusters. These clusters provided fault-tolerant stateful packet inspection and anti-virus security. VPNs are also terminated on these clusters, ensuring that equipment failure will not cause an outage for our VPN customers.

The second level is the Wide Area Network. To provide site level protection, EVE spans multiple data centers, and to ensure secure, reliable communication among our sites, we have implemented a OC-192 SONET Ring with up to 10 gbps connecting all sites together. SONET is a high-speed, redundant fibre network.

Next we have Physical Storage Infrastructure.
Infinitely Virtual provide Industry Leading Data Protection. All virtual machines and their data is stored on one of our clustered NetApp Filers. The volumes are configured with RAID double parity or RAID-DP as implemented by NetApp, which can survive up to two simultaneous drive failures without causing down-time or losing data. Therefore, customer servers can still remain online even if a raid group sustains two drive failures at the same time. In addition, all data is replicated from the primary data center to a secondary data center on an hourly basis, protecting all customer data through any catastrophic failures at the primary data center. Also we provide Industry Leading Fault-Tolerance. The filers are clustered, meaning that if one of the controllers fails, the remaining controller will automatically take over the load. This configuration is designed to maintain server availability through any hardware failure. Finally, Industry Leading Disk Performance Volumes are composed of 15,000 RPM enterprise fibre-channel drives, making our storage among the fastest in the industry.

The last level of the Network, Server and Storage layer is Physical Server Infrastructure.
We provide Raw Performance to satisfy our requirements for density and power efficiency. Our physical server layer features HP Proliant bl490c blades in c7000 BladeSystems. Each blade has up to 192 GB ram and up to 12x 2.53 Ghz cores. Physical servers are connected to the backbone by a redundant, low-latency 10 gBITps switch fabric. This configuration ensures high performance and network fault-tolerance.
Each BladeSystem enclosure enables up to 16 physical servers to share power supplies, fans and network interconnects. Servers boot from ultra low-power SSD drives. This configuration enables E.V.E. to operate at some of the lowest watts/virtual server in the industry or approximately 8 watts/vm.

The last main layer of EVE is the Virtualization layer. This layer starts with the VMware VSphere HyperVisor
The VMware vSphere Hypervisor is the heart of E.V.E.’s virtualization layers. A hypervisor is the software that creates for every virtual machine (VM) the virtual system board and bios, virtual CPUs, virtual RAM, virtual network cards, etc. Accessing hardware through this hypervisor, each VM has its own independent operating system, enabling customers to have complete control over their virtual server.
VMware Outperforms Physical Servers and due to this, we can support a wide array of virtual server operating systems. It has been demonstrated that web servers based on VMware outperforms physical servers. And in most applications, vSphere performs comparably to physical servers. With 100% of the Fortune 100, 98% of the Fortune 500 and 96% of the Fortune 1000, vSphere is the most trusted virtualization product in the industry. Next we have Virtual Switch Infrastructure. Virtual Machines are connected to ports on one of our Distributed vSwitches, based on VMware vSphere technology. Each dvSwitch is composed of virtual ports connected to individual VMs and redundant 10 gBITps physical uplinks from each VMware host to our redundant 10 gBITps switching fabric. Each virtual port belongs to a VLAN or virtual LAN, which fits into one of the following classifications:

VMs and their associated firewall or layer 3 switch interface in the same VLAN, may communicate among one another regardless of what host they are on. Therefore, customers with multiple VMs may have their load distributed among all available hosts on a dvSwitch. And individual VMs may operate from any host in the system.

The next level is Virtual Storage Infrastructure. E.V.E.’s Virtual Storage Infrastructure is composed of multiple VMware datastores on our NetApp Filers. Using Storage vMotion, a component of VMware vSphere, we can move VMs from one datastore to another “hot” or without shutting down the virtual machine. This gives us the ability to load-balance datastores without disrupting customer uptime.

Every VM in our environment is backed up nightly by taking a point-in-time snapshot of the entire datastore. Unlike our competitors who take crash-consistent snapshots of their customers’ servers, we take application-consistent snapshots. The process for this is to instruct the VSS aware applications on each VM to quiescent all transactions, including:


This configuration ensures that we can restore your server from any backup with all data intact. This is not true of crash-consistent snapshots. We retain nightly backups for 7 days and weekly backups for 4 weeks.
E.V.E. has the unique ability to restore an entire VM, regardless of size, in minutes. This means that restores that may take hours on our competitors’ infrastructures take just minutes on ours. We enable you to choose between restoring an entire virtual machine or a single file. Lastly we have DRS, vMotion & VMware HA.

Virtual Center & Distributed Resource Scheduling
The intelligence behind the virtualization layer of E.V.E. is VMware vCenter Server. vCenter monitors the resource utilization of individual hosts and VMs, and it monitors the aggregate of available resources in all host clusters.

One of the most important features of vCenter is Distributed Resource Scheduling, which allows vCenter to dynamically allocate resources to individual VMs and to load-balance VMs among available hosts to ensure that every server has access to the resources it has been assigned. In our environment, that means that every customer VM has access to it’s assigned physical resources, and it performs consistently over time.
We also have vMotion: Hot Migration. This is the method by which vCenter dynamically load-balances resource utilization among hosts is called vMotion. Sometimes called hot migration, this feature allows vCenter to move a VM from one host to another without disrupting the virtual machine. This enables us to perform maintenance on any host without shutting down customer VMs.

Another role of vCenter is to monitor the health of the hosts and the VMs. If for any reason vCenter detects a host failure, all virtual machines on that host are immediately unregistered from that host, registered on another host in the cluster, and the VMs are then booted up on the new host. This feature gives our customers a very high level of protection from hardware and other failure on a host. Every VM in our environment has this protection included in the cost of their plan.

We offer an option called VMware Fault-Tolerance. This feature creates an active-passive cluster of two VMs. Using a special heartbeat network, vCenter monitors the primary virtual machine, and if it stops responding for any reason, the secondary VM takes over for it.